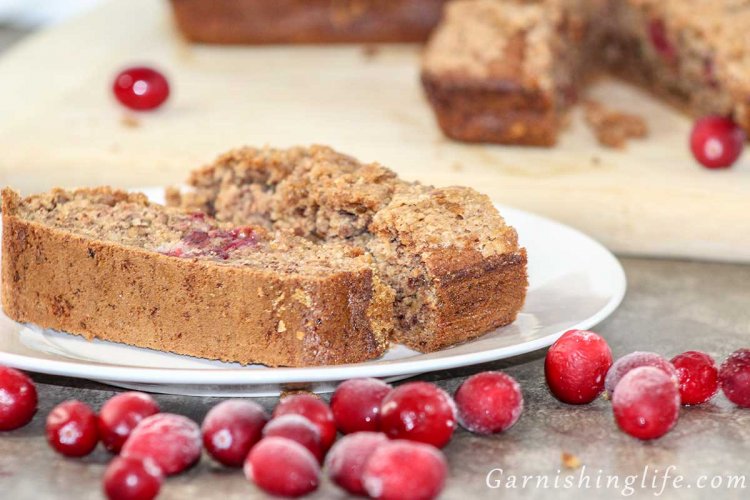 There honestly isn’t even a story or fun anecdote for my Cran-Banana Bread. I simply had a craving for something with the frozen cranberries I had and thought, let’s make rubied cranberries and then put them in bread. At some point I had the weird idea to make it banana bread. I’ve never considered a banana and cranberry combo, and it doesn’t even sound good at first. But once I made these, I was happily surprised. The cloves and cinnamon really tie everything together.  I wasn’t going to make this a blog recipe, I just wanted to make some Cran-Banana Bread. It turned out so great, I had to share. I love the sugary crumbles on my coffee cakes, I don’t usually add a crumble to my banana breads, but I thought it would be fun! I may add it to my normal banana breads from here on out because it was perfect!

First we start with making those rubied cranberries. This was my first time trying it out, and I think it worked pretty well. I didn’t really want the cranberries to be whole and unsweetened. So, the cranberries, sugar and water get stirred together in a saucepan and over medium heat, bring to a boil. Once the boil starts, turn down to low and simmer for just a few minutes.  The cranberries should start popping. Stir as they do. Remove from heat and allow to cool while you prep the bread batter. Preheat the oven to 375 and prepare 2 loaf pans by evenly coating with cooking spray. In a bowl, whisk together 1 ½ Cup of flour, baking soda, salt, 1 tsp cinnamon and the pinch of cloves. In another bowl, cream together the 2 TBS unsalted butter and brown sugar. Then we beat in the bananas, vanilla and buttermilk, followed by the flour mixture. Don’t overbeat, just until combined. In a small metal bowl, beat egg whites. Increasing from medium to high until peaks form. This may take several minutes. Then gently, fold the egg whites into the batter, followed by the rubied cranberries and walnuts. Stir and pour into the pans. Last, we do the crumbled topping! Mix the remaining brown sugar, flour and cinnamon and cut in 2 TBS cold, unsalted butter. Stir to get those coarse crumbles and chunks. Sprinkle over the top of the batter.

Bake for 10 minutes to cook those crumbles. Then, drop the temp down to 350 and finish baking for 35-40 minutes.  Once done, allow to cool for 10-15 minutes on a wire rack before serving. I love my bread as is, but you can Garnish with a little butter on a warm piece of bread, or a dollop of honey.

Just look at how delicious this Cran-Banana Bread looks! The bread is moist, the cranberries sweet, what more could you want?

If you liked this recipe, you may also like our Pumpkin Spice Scones. They’re lightly sweetened and subtly spiced. So good! 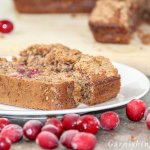 If you don't have buttermilk, you can make your own by adding 1 teaspoon of lemon juice to a liquid measuring cup. Add milk until the level reaches 1/3 cup. Let sit about 10 minutes before use. The mixture will thicken or curdle. Egg whites can be very finicky to beat. Make sure to use a clean, dry metal bowl and mixing attachments.